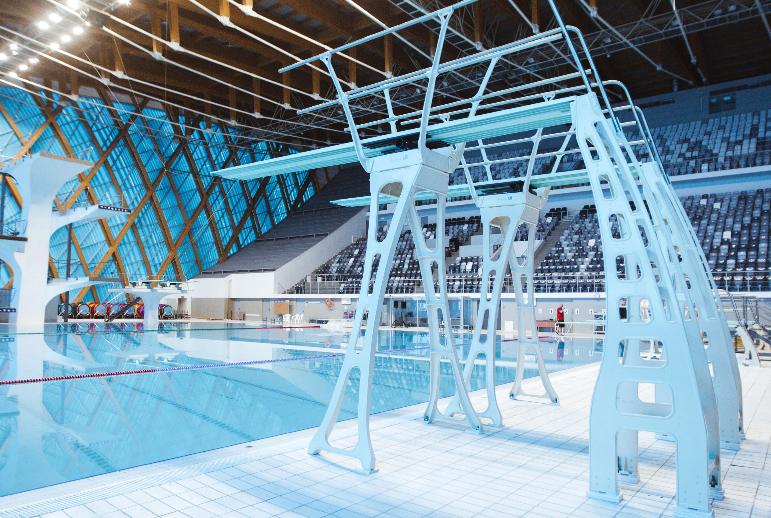 The Kazan Aquatics Palace, where athletes from the FINA Development Centre, as well as sports schools students and residents of Tatarstan have their practice, was equipped with new specialized diving equipment and gear that meets all international FINA standards and requirements are engaged.

Thanks to FINA Partner, the Official Supplier Duraflex (USA) all springboards purchased for the 27th Summer Universiade 2013 were replaced, and 1m and 3m boards and diving blocks were additionally installed in the Aquatics Palace pool. The second specialized hall for diving classes is equipped with sports trampolines, acrobatic tracks, and soft landing pit cube

“The decision to renovate the equipment was made with the full support of the FINA Development Centre by the President of the Republic of Tatarstan, Mr Rustam Minnikhanov. Now the Centre scholarship holders will be able to prepare for the top-level competitions and improve their sporting prowess as efficiently as possible, and sports schools students as well as residents of Tatarstan will have the opportunity to practice at the highest class equipment. I am sure that it will significantly increase number of people keen on diving, will serve the further development of aquatic sports, and will increase the number of adherents of a healthy lifestyle in our republic, ”says Mr Vladimir Leonov, Minister of Sports of the Republic of Tatarstan.

It is to be recalled that the FINA Development Centre Collaboration Agreement was signed on 22 September 2018 by the FINA President Dr. Julio C. Maglione and the Minister of Sports of the Republic of Tatarstan Mr Vladimir Leonov.

The main goal of the FINA Development Centre is to create the most favourable conditions for unlocking the potential of athletes representing countries with minor national achievements in swimming, as well as providing opportunities to improve their results in preparation for the World Championships and the Olympic Games. Upgrading the qualifications of coaches and officials from Russia and neighbouring countries and conducting educational programmes for coaches and officials are other priorities of the FINA Development Centre. The project operator is ANO “Directorate for Sports and Social Projects”