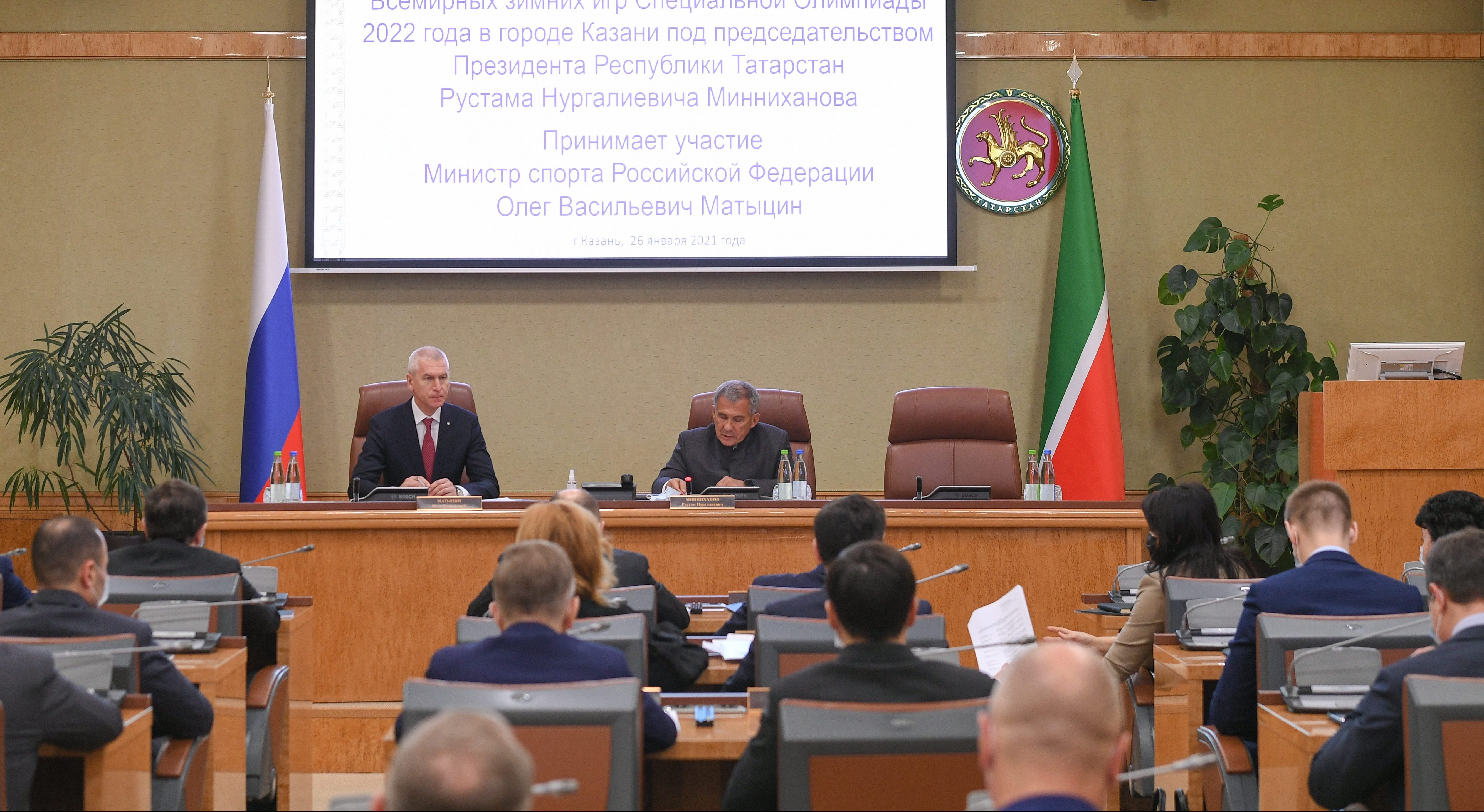 Today, the Tatarstan President Rustam Minnikhanov conducted the Meeting of the Republican Committee for the Special Olympics World Winter Games Kazan 2022. It was held in the Government house of the republic and featured the Minister of Sport of the Russian Federation Oleg Matytsin.

Special Olympics World Winter Games is a prioritized sports project of the Russian Federation for the year 2022, particularly said Rustam Minnikhanov. According to him, the Games in Kazan will allow demonstrating the whole world that the Special Olympics movement stays out of politics.

“Our overachieving objective is to deliver the Olympics keeping the top level. This is the reason the Republican Committee for the Special Olympics World Winter Games Kazan 202 2has been formed for”, stated the President Minnikhanov.

He thanked Oleg Matytsin, on whose initiative the Russian Federation Government is now considering the draft decree for the federal committee formation.

We are ready to arrange the Federal Committee meeting in the near future, announced Rustam Minnikhanov.

Tatarstan President emphasized that today consistent preparation work in the lead up to the Olympics is underway. Thus, close cooperation with the Russian Ministry of Sport has been established, topical issues on preparation will be discussed within the framework of the republican operation headquarters and working groups.

Rustam Minnikhanov specified that the Ministry of Sport of the Republic of Tatarstan and Directorate for Sports and Social Projects supervise the overall preparation.

“Tatarstan has gained extensive experience in delivering large-scale sports competitions and social high-profile events, a team of professionals has been formed in the republic, a good urban and sports infrastructure has been created, everything required to organize the games at a high level is in place,” stated Rustam Minnikhanov. In his welcoming speech, Russian Minister of Sport Oleg Matytsin took notice of Tatarstan’s capability to organize the events involving a large number of people in the 2020 challenging environment. He showed appreciation to the leadership of the republic and all colleagues who were engaged in sports events throughout 2020 jointly with the Ministry of Sport of Russia. “When it comes to Special Olympics and Special Olympics Russia Games in Kazan, I would like to highlight that it is a great honor and responsibility, especially in such difficult circumstances,” – said Oleg Matytsin. He emphasized: Tatarstan’s experience in organizing major competitions deserves the highest appreciation and this event will undoubtedly be delivered at the highest level both in terms of hospitality and international event standards.”

Russian Minister of Sport reminded that now we are going through the stage of the Federal Committee formation and approval to be chaired by the Deputy Prime Minister of Russia Dmitry Chernyshenko.

“Paramount idea is to generate the legacy of the event – Special Olympics World Winter Games Kazan 2022, and all federal agencies are currently working in this regard. Experience that Kazan possesses thanks to the Universiade and other major sports events speaks for the fact that legacy will certainly turn out very effective for the Russian Federation,” stated Oleg Matytsin.

Tatarstan Minister of Sport Vladimir Leonov and Director General of the Directorate for Sports and Social Projects delivered the reports at the Republican Committee meeting.

Source: Press Office of President of Republic of Tatarstan