“Results at the European Championships in Kazan will be very good” 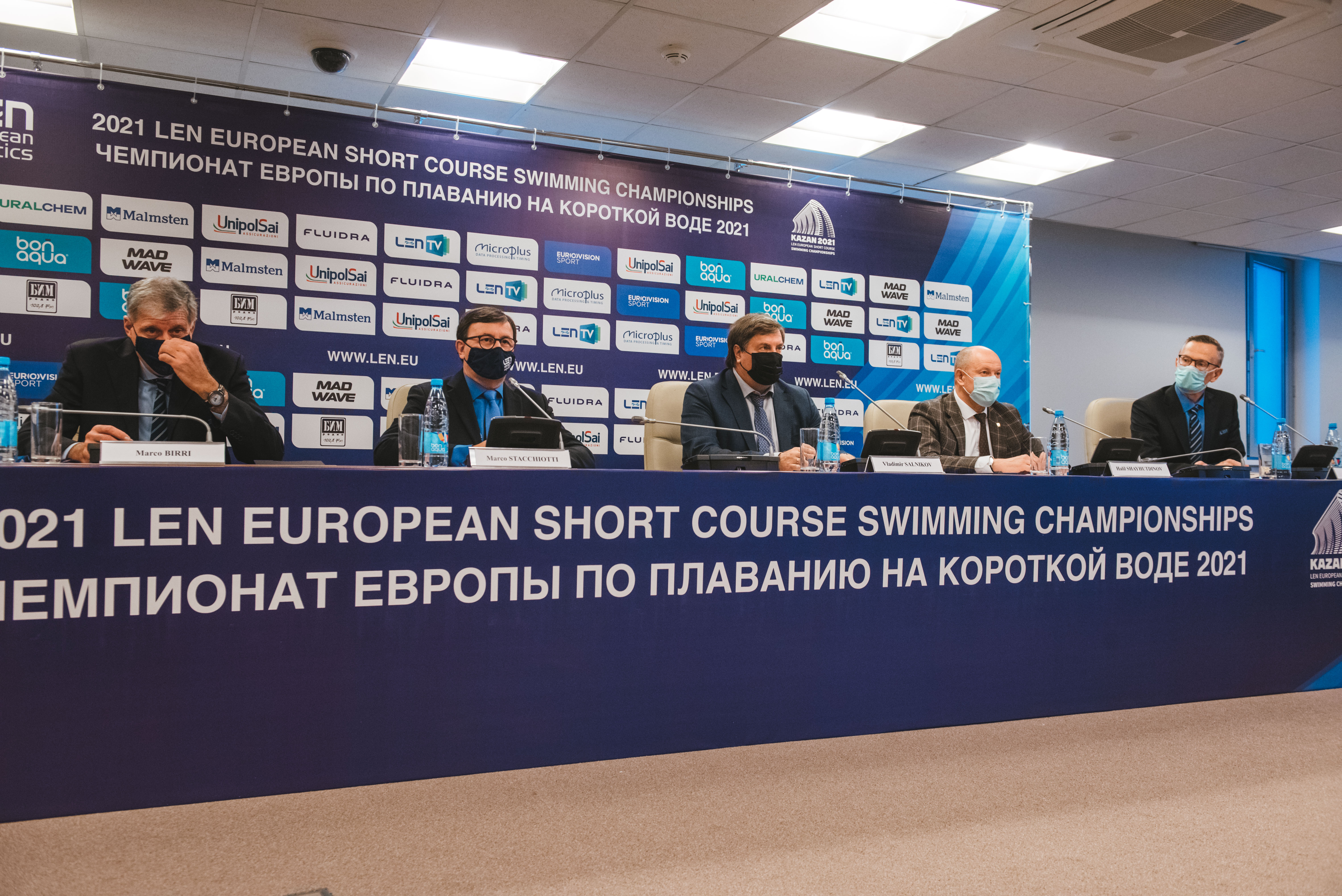 The European Short Course Swimming Championships will take place in Kazan from 2 to 7 November. Before the event kick-off, Aquatics Palace hosted a traditional press conference featuring the athletes and organisers

President of the All-Russian Swimming Federation Vladimir Salnikov was the first to deliver the speech addressed to the tournament participants and highlighted the status of Kazan in the aquatics world.

“On behalf of the All-Russian Swimming Federation, I welcome you to Kazan. This city has become home for us and is rightly considered the capital of Russian and, most likely, global swimming. Kazan has hosted a lot of major swimming tournaments and will host the FINA World Swimming Championships (25m) in 2022 and FINA World Championships in 2025. Hopefully all participants will be contented,” Vladimir Salnikov told.

“On behalf of the European Swimming League, on behalf of the LEN President, I am delighted to welcome all the athletes to Kazan. Let’s wish good luck to the athletes at the European Championships. Over the past months, due to the pandemic, our generation of athletes has changed and perhaps the younger generation will show even better results in Kazan. We are looking forward to vivid emotions and high results at the European Championships,” Marco Stacchiotti stressed out.

First Deputy Minister of Sport of the Republic of Tatarstan Khalil Shaykhutdinov thanked the European Swimming League and the participants for the trust placed in Kazan. “We wholeheartedly welcome the European Championships participants and are thankful to LEN and the All-Russian Swimming Federation for their confidence in us. European Short Course Championships is held for the first time bringing together over 400 swimmers. Thank you all who have come despite any circumstances,” Khalil Shaykhutdinov said.

Craig Hunter, Chairman of the LEN Technical Swimming Committee, rated high Kazan’s readiness to host the European Championships. “Once again, let me thank Kazan for the warm welcome and high-standard organisation. You have established the best conditions for the athletes, so they can be sure that everything will go well. Many thanks especially to the All-Russian Swimming Federation, Republic of Tatarstan and the local organising committee for their support in organising this event. We wish the athletes good luck and great results. Maybe we will see new records at the championships,” Craig Hunter expressed.

According to the LEN Operations and Events Manager Marco Birri, the European Championships should turn out to be exciting and the prize money has increased.

“I would like to stress the importance of this event. A lot of work has been done to organise the European Championships. There are new things implemented, among which are the increase of the prize money and 6-day programme, which is longer than usual. There are Olympic champions, the strongest swimmers from different European countries among the participants. We are happy to be back to Kazan,” Marko Birri noted.

“It was a successful season for me. I had a break after the Olympics, so my fitness went down. The participants of the tournament in Kazan are really strong, so I need to be as good as they are. I hope to show high performance,” Evgeny Rylov said.

“After the Olympics, I had the whole month of vacations, and this is the longest holiday in my career. I am looking forward to the European Championships to compete in several events,” Simona Quadarella said.

“I am not fully satisfied with my swim at the Olympics, and I hope to show a better performance in Kazan,” Maria Kameneva said.

“At the European Championships I want to gain more experience and have fun. There are many athletes here that I need to look up to,” David Popovici added.