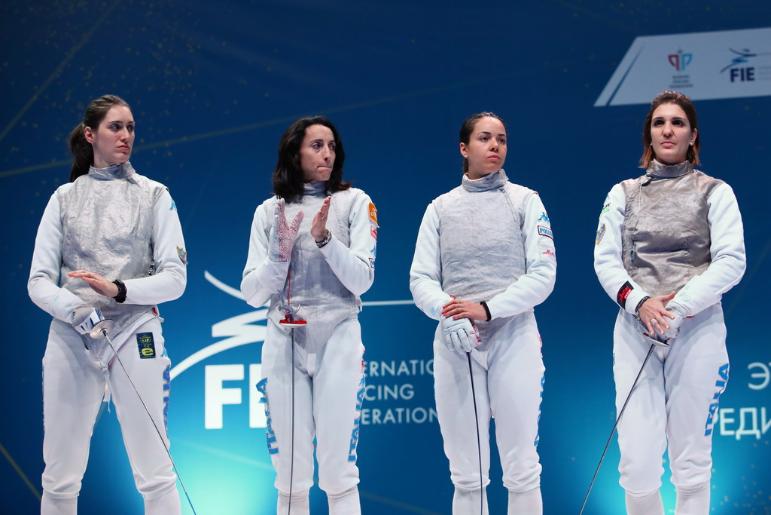 Italian fencers were unbeatable in the team tournament at the FIE World Cup in Women’s Foil in Kazan.

On the final day of the FIE World Cup in Kazan 18 national teams competed for the podium spot in the team tournament. They competed in an elimination round, in which, in addition to medals, they were targeting points that could help them to qualify for the Olympics. For some teams it was their last chance to be selected for the 2020 Games, so the stakes were high for them.

In the table 16 tournament, the Russian national team easily defeated the team of Romania (43:27), Italy managed to beat Uzbekistan (45:19), and the national teams of Poland and Hungary who strongly needed points to qualify for the Olympic Games, bested the teams of Korea and China.

It was Poland that sent the Russian national team packing, having defeated them in a nail-biting quarterfinal duel, 42:41.

“We already have an Olympic berth, and our purpose for this tournament was to increase the level of fencing against certain rivaling fencers. Poland has a really strong team. We are not very upset by a defeat, as the main task for us is preparation for the Olympic Games,” Team Russia’s foil fencing head coach, Dmitry Shevchenko, shared the plans.

The other semifinalists were the national teams of the United States, France and Italy. The American team beat Poland in the semifinal, 45:36, and Italy confidently defeated the French fencers, 45:28. But in the final, the Italians were unstoppable against the US team (45:27). In a tense battle, bronze went to the French, whereas this defeat cost Team Poland a spot at the Olympic Games.

“The Olympic selection is based on the overall points collected, and Hungary needed to score a certain number of points so that they could be ahead of the Polish team. If Poland had won against France in a match for bronze, they could have won a berth at the Olympic Games,” Dmitry Shevchenko explained.

The Russian national team beat Japan and Hungary in the 5th-8th place event, but it was the Hungarian team that earned a ticket to the Tokyo 2020 Olympic Games.