Rustam Minnikhanov: The centenary of the republic has become an important factor in unity and a source of pride for the Tatarstan people 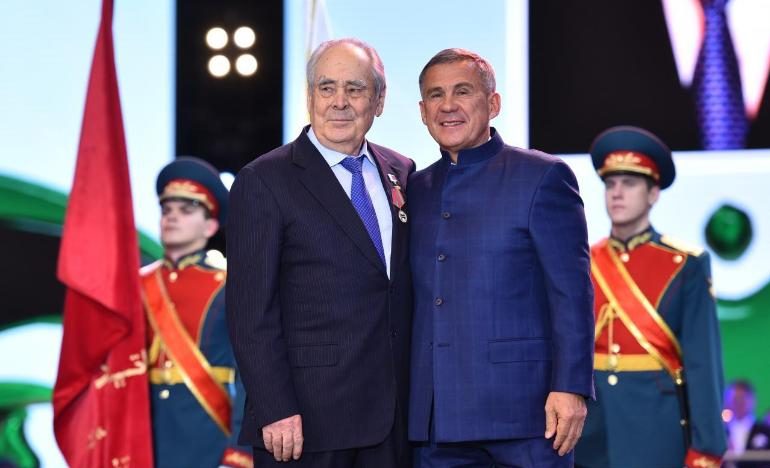 Deputy Prime Minister Marat Khusnullin emphasized that the Republic of Tatarstan has leading indicators in terms of socio-economic development and is consistently one of the three leading regions for the implementation of national projects. “We see how Kazan and other cities of the republic are being updated, how modern solutions and historical objects of cultural heritage are harmoniously combined. The preparations for the celebration of the 100th anniversary of the founding of the Republic of Tatarstan also contributed to the development of the region. It should be noted that the measures are implemented by the republic on their own, practically without raising funds from the federal budget, ”he said.

Marat Khusnullin said that the plan for the preparation of the celebration of the anniversary includes 4 sections, 76 events. Most of these are cultural, educational, scientific and educational projects, ceremonial events, the implementation and holding of which will make it possible to demonstrate achievements, popularize the cultural heritage and national identity of the Republic of Tatarstan.

Rustam Minnikhanov noted that the meeting was held on the birthday of the republic, when the Tatar autonomy created by Lenin’s decree gained real power. “We are grateful to the President of the Russian Federation Vladimir Putin for the decree on the celebration of the 100th anniversary of the Republic of Tatarstan, in accordance with which a large-scale program of anniversary events is being implemented,” he emphasized.

The President of Tatarstan said that the start of the celebration of the anniversary of the republic was given in December last year at the Kazan Expo exhibition center. The coronavirus pandemic slightly adjusted plans, but did not affect the attitude towards the anniversary, as well as the desire to hold it at the highest level, the President of the Republic of Tatarstan said

Rustam Minnikhanov noted that on May 27 this year, a solemn meeting of the State Council of the Republic of Tatarstan was held, dedicated to the 100th anniversary of the signing of the Decree “On the Autonomous Tatar Socialist Soviet Republic.” “This historical document became an act of revival of our statehood, played a decisive role in the implementation of the economic, political and socio-cultural rights of all peoples living in the territory of Tatarstan. And on this day – June 25 – exactly 100 years ago, the chairman of the Kazan Provincial Executive Committee at a solemn meeting dedicated to the declaration of autonomy announced the transfer of power to the Temporary Revolutionary TASSR,” the President of the Republic of Tatarstan said.

Rustam Minnikhanov said that many events dedicated to the anniversary of the republic have already been held this year. The President of Tatarstan thanked the federal executive authorities for their active participation in their implementation.

“The centennial anniversary of the republic has become an important factor of unity and the subject of pride of the Tatarstan people, as well as a significant date for the whole country – our common Fatherland. I am sure that thanks to the coordinated work of all the members of the organizing committee, we will be able to adequately carry out all the events outlined by the federal plan, ”added Rustam Minnikhanov.

Mintimer Shaimiev, in turn, noted that in addition to successes in the economic sphere, an important achievement of the republic is inter-ethnic and inter-confessional peace and harmony, friendship between representatives of all peoples living in the territory of Tatarstan. “Of particular importance is the spiritual revival, preservation of our traditions, mother tongue and national culture. In 2010, we took up the revival of the ancient city of Bolgar and the island-town of Sviyazhsk. All residents participated in the restoration of these facilities. We have managed to do a lot over the years. And most importantly, Muslim and Orthodox shrines were included in the UNESCO World Heritage List, ”added the State Advisor to Tajikistan.

Before the inaugural meeting of the Cabinet of Ministers of the Republic of Tatarstan, the exhibition “100 years of the TASSR” was opened in the Kazan City Hall, reflecting important moments in the history of the republic. The exhibition includes photographs, documents from various collections and funds of the republic, the best works of masters of fine art of Tatarstan, household items and newsreels. Among the iconic exhibits are the banner of the TASSR of 1920, a card of 921, a membership card of a member of the Central Executive Committee of the Soviets of Workers, Peasants and Red Army Deputies, an invitation card for the celebration of the 10th anniversary of the TASSR on July 20, 1930, a check from the Workers’ Cooperative of Kazan Public Utilities, banknotes, lifetime editions of Tatar publishers Hadi Taktash, Adel Kutui and much more. The presented exhibits are vivid evidence of the era and reflect a number of major events in the history of the republic: the formation and development of statehood, industrialization, the creation of the petrochemical industry and large-scale mechanized agriculture, as well as the development of culture.

The combination of modern technologies – from projections to sound design – allowed us to achieve maximum immersion in centuries-old history. So, at the very beginning of the event, guests were able to travel in time – take part in a congress at which the boundaries of the future TASSR were determined. It is noteworthy here that these congresses took place directly in the Town Hall building in 1918-1920.

Source: Press Office of President of Republic of Tatarstan