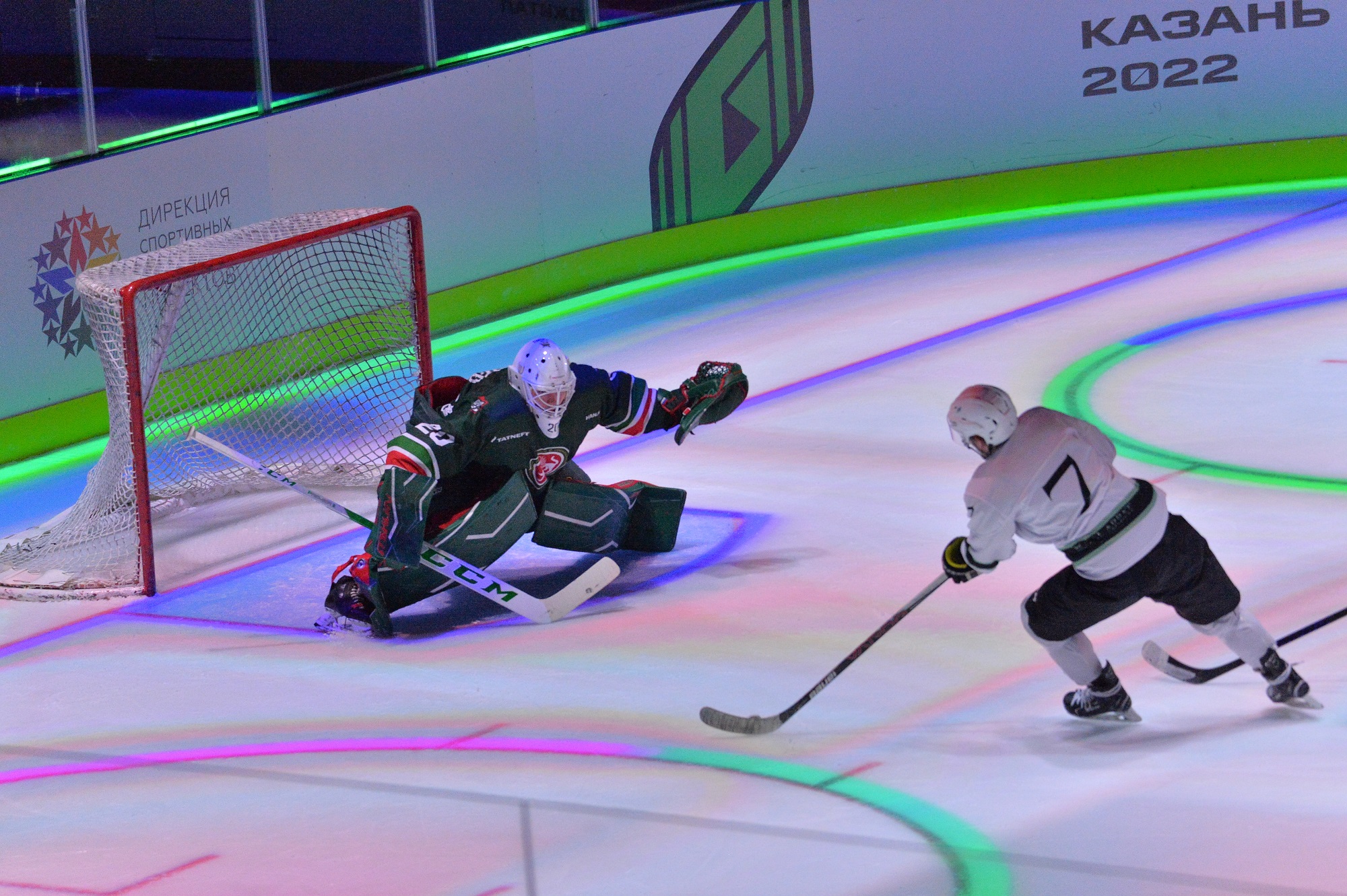 Naebski and Barys Cyber Team were the first to face off. The phygital players first grabbed the joysticks and took on the game in Threes Eliminator mode. The Naebski team chose to play for the NHL club Tampa Bay Lightning, while Barys Cyber Team picked the US national team. It was a hard fight ended in a tie with a score of 2:2.

With this, the two teams moved on to the physical part of the competition on real ice with three periods of seven minutes each. The Naebski team players stormed ahead just to run up against a counterattack, which saw Azal Kokirek-6142 Mambetaliev score a goal. The blogger team kept pushing on and ganged up on their opponents’ goalposts but they kept failing getting past the goalkeeper of the Kazakhstan team Kirill orusskiy99 Orussky for quite a while. The Naebski team had more luck when Aleksand KOS Kosobokov carried out a penalty shot. He soon became the hero of this match by scoring a total of four goals. The final score was 10 to 4 in favor of Naebski.

“I’m overrun by emotions!” confessed team Naebski captain Yaroslav YARKUZYA Kuzmichev, “Early during the game, our team got a little lost after Barys Cyber Team had at some point beaten us by the number of goals. Maybe none of us were ready for such a great show, for this laser-rich performance. We hadn’t played on ice with so much light on it before. But then we stepped up our game and showed class. Everyone got a real kick out of it and that’s the most important thing. We came here not only to win but also just to enjoy the type of sport that we love the most.”

“I’m not upset in any way. It is a big event, a big thing. This is the first experience of this kind for us. We really enjoyed it. It really blurs the lines between the virtual and the real. The 3-on-3 hockey tournament proved to be quite difficult. It took a lot of effort but I hope the fans got the most out of this spectacular game,” said Barys Cyber Team player Abay Abaymukuha_19 Mukushkin.

“We were feeling a bit nervous, because the whole thing was quite unusual to us. First, we had to play on the console. But once we got through our two-on-two game on the console, we knew that we would seize the victory because we were confident that we’d perform well on the ice. We were feeling a bit uncomfortable during the first period because of the graphics on the ice but then we got used to it. It felt like playing air hockey, only on ice,” player Aleksandr KOS Kosobokov concluded.

“My impressions are only positive. It’s a very interesting competition format. It’s inspiring to know that we are the ones to have blazed a trail in this new discipline. I would’ve never dreamed that the console and real hockey could be married like this. I have to tell you this whole thing is mind-blowing!” Naebski team player Evgeny Sparrow Vorobiov said.

Ak Bars and Cosmos were the next to compete against each other. Both teams chose the Canadian national team in the NHL 22 and it served them well. The players were efficient in their game with both teams scoring a total of 11 goals. The Kazan team ended up winning the virtual part of the tournament with a score of 6:5. The Moscow team, however, pushed hard to regain lost ground once on ice. First, Anton Borkes15 Borko, availing himself of an opponent’s blunder, got past the goalkeeper and scored a goal which leveled out the playing field. Then two Cosmos players pulled off quite a penalty shot which gave their team the lead. In the remaining time, both teams scored one goal each but this was not enough for the Kazan team to reach the final. The final score was 8 to 7 in favor of Cosmos.

“The game was hard and very emotional, too. We did prepare well for the match, both physically and mentally, because we knew that it was the host team that we’d be going up against. Ak Bars is a formidable team both at the console and on the ice. Thank God, we won. I’d like to thank all of my guys for their effort.  It takes experience to play tournaments in such a format and now we have it. We’ve played about two hundred games together, our team, and that proved quite helpful,” Cosmos goalkeeper Viktor Kornyak90 Kornyakov shared his impressions.

“Our spirits were up before the game. But it’s just that the format of the tournament is new for us,” Ak Bars goalkeeper Maksim Arefyev told. “We are still used to playing at large venues. We probably should’ve spent more time on the field just to get the feel of it. The guys from Cosmos, apparently, are quite accustomed to such fields and playing tournaments on the sites like that. That’s why they beat us. Still, I find this format quite neat: first a match at the console, then a face-off on the ice. I think the next tournament is happening in May next year. So we got a taste of what it’s like now to be really ready next year.”

“The 3-on-3 format is a bit unusual for us. The opponents were better trained. We failed at the start of the match. We tried to catch up but it didn’t work out for us. This format may be different but it doesn’t change the fact that it is still hockey. I’m glad we got this experience. Playing the console wasn’t really a difficult task. We are going to prepare for the next match now to take the bronze,” Ak Bars player Daniel Daniel-81_Best Nasybullin declared.

Ak Bars and Barys Cyber Team are poised for a face-off in a match for the third place on Saturday (December 10). It starts at 5 p.m. Moscow time. Cosmos and Naebski will meet in the final (7:00 p.m. Moscow time).

Phygital Games will be streamed on the “Games of Future” channels along with the VK platforms – VK Play and VK. Follow the link https://gof.vkplay.ru/ to watch the competitions.

Information on the rules of the competitions and the lists of participants are available via the link: https://gamesofuture.com/project/fidzhital_igry_noyabr_dekabr_2022 /