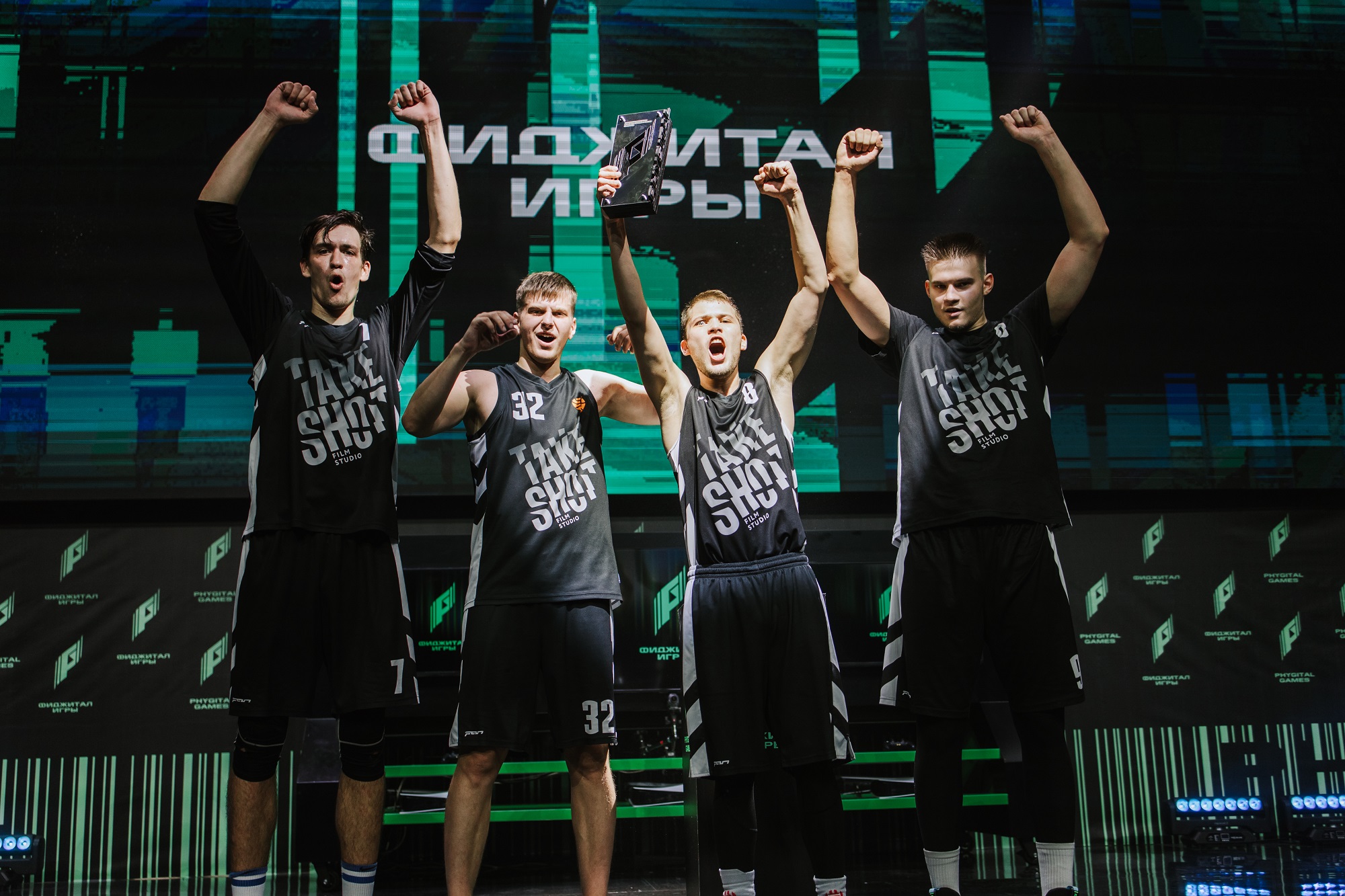 Take Shot team went down in the Phygital Games history by becoming the first winner of the phygital basketball tournament. In the tough final, they beat Liga Pro – 34:32.

The phygital basketball contains two parts: first, the players compete in a basketball simulator, and then, with the points scored in a virtual game, they go into to a real basketball court to find out who is the strongest there.

The Liga Pro team expectedly banked on the digital part of the match, and at the beginning their plan worked out. Nikita Savchenkov, Daniil Maksimenko and Vladislav Vasiliev realized quick attacks that ended with spectacular dunks. They were good at defending and preventing Take Shot from narrowing the score. When the gap reached 10 points – 17:7 – Liga Pro had two shots left to win. At this point, Take Shot flipped a switch, leveled the defensive play and turned the tables. Yes, Liga Pro did win in the end – 21:18, but three points is not the lead they wanted to enter the real field of play with.

It took the Take Shot players a couple of minutes to catch up with the opponent, and after several shots by Andrey Elin and Kirill Gorshkov, they had a plus 6 lead – 28:22. Alas, because of the injury Oleg Khokhlov, one of the Liga Pro leaders, couldn’t play to the full, but despite his imperfect condition, he gave the Take Shot defense a lot of problems. After his shot, Liga Pro got back into the game – 26:28, and in the end he converted two free throws and brought the team another chance – 32:34. But the score hasn’t changed anymore.

Take Shot claimed the victory in the phygital basketball tournament within the first Phygital Games with Roman Derevyankin, Kirill Gorshkov, Andrey Elin, and Andrey Kurchenko on a team.

“From the very beginning we knew we would win! Believed in ourselves and did win! Before the tournament I thought we would play with BC Minsk in the finals, but we caught them in the semi-finals. We had no doubts about the victory over the Liga Pro. We were just a bit inferior to them in cyber basketball, but were sure we would get back in 3×3 basketball,” Take Shot player Kirill Gorshkov claimed.

“In the cyber part, we let the opponent close the gap and make the score more enjoyable. Take Shot is not just random guys. They take part in cyber tournaments, some of them played in the Super League. Phygital Games is something new and fresh. Perhaps the audience has got a bit tired of the regular format of sport, while phygital will spark the interest. Nobody has seen this before,” Oleg Khokhlov from the Liga Pro team shared his opinion.

In the bronze medal match with a 35:33 score, the Let’s Go team defeated BC Minsk. Interactive part gave the Minsk guys a good advantage – 21:8, but, just as in the semi-finals, the mistakes on the court at the end of the match and too many fouls let them down. Daniil Stebakov scored with a foul at the 24:28 score and immediately hit from behind the arc – 28:28. Artem Chebotarev added two more points, and he also converted key free throws – 34:33. What a character! Minsk still had 33 seconds left to save the game, but Stebakov took a crucial rebound under the glass, and Roman Moskvitin missed his shot.

“Everything was good in cyber, but in 3×3 the opponent was moving the ball well, constant flick-backs, quick movement. At the end, we didn’t have enough power, decisions were stupid. I would like to recommend the organizers to help the referees with such tools as the “challenge” in disputable situations. The organization is just amazing, but officiating is something to advance for the next tournament,” Minsk player Denis Bergman said.

About the Phygital Games

First Phygital Games will take place in Kazan on 21-23 September.

Teams from Russia, Belarus, Brazil, Turkey, and Bulgaria will be competing in the tournament.

The games are exclusively streamed on VK platforms – VK Play http://vkplay.ru and VKontakte http://vk.com/gamesofuture. Follow the link to watch the competitions http://gof.vkplay.ru.

Phygital Games kicked off in Kazan