ALEXEI VLASENKO – “WE HAVE STARTED FOCUSED PREPARATION FOR THE MAIN START – THE TOKYO OLYMPICS IN 2021!” 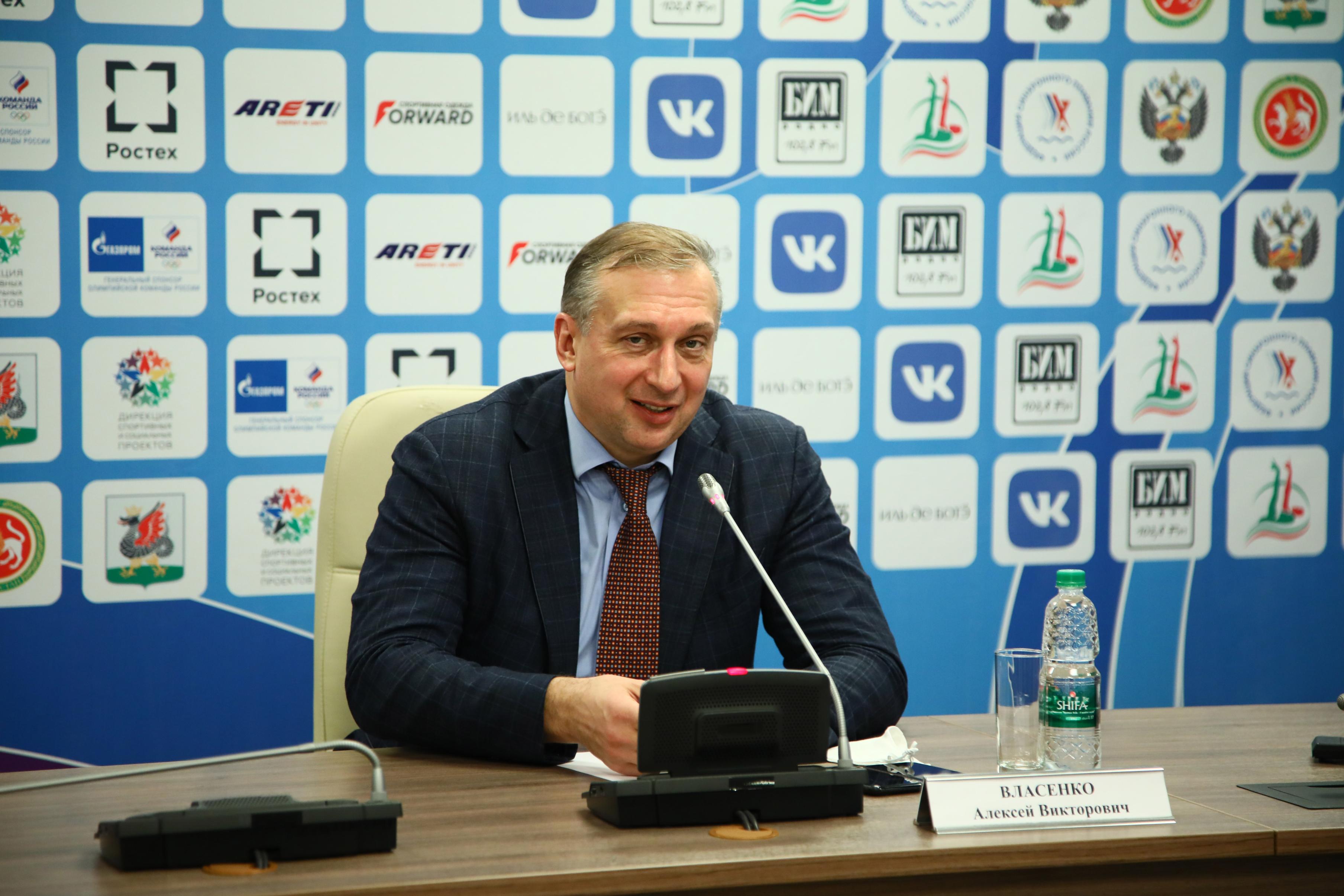 From 25 to 27 November, the Kazan Aquatics Palace will host the Russian Synchronised Swimming Championship. The tournament will be held for the fifth time in the capital of Tatarstan. This year, it will bring together 350 athletes from 14 regions of the country. The competition will be broadcast in the official group of the Directorate for Sports and Social Projects on VKontakte.

Alexei Vlasenko, member of the LEN bureau and member of the FINA technical committee and president of the Russian Synchronised Swimming Federation, Vladimir Leonov, Tatarstan’s Minister of Sport, Ghana Maksimova, senior coach and director of the Russian national team in synchronised swimming (mixed duets), and athletes told a press conference about the upcoming competitions ahead of the championship.

Alexei Vlasenko noted that Kazan is rightly considered the capital of aquatics. “Despite all the difficulties that occur in the world, Kazan is ahead of all, it is the capital of aquatics. It is no coincidence that the Russian championship is held in the swimming pool of the Aquatics Palace during the difficult time of the pandemic, which always hospitably welcomes us,” said the President of the Synchronised Swimming Federation. In his opinion, Kazan today is number one in terms of the level of organisation and staging of competitions. He also expressed his gratitude to the President of Tatarstan, Rustam Minnikhanov, for his contribution to the development of aquatics.

“We have already begun the purposeful preparation for the main start – the Olympic Games in Tokyo in 2021,” Alexei Vlasenko noted.

According to Vladimir Leonov, Minister of Sports of Tatarstan, partnership with the Federation is important for the republic, so even in such difficult times events are held here. Vladimir Leonov noted that recently the Aquatics Palace hosted a number of tournaments – the Russian Swimming Championships, and the President’s Cup of the Republic of Tatarstan in Diving. The Russian Synchronised Swimming Championship has already become a tradition in Kazan – it is being held here for the fifth time. Last year, the capital of Tatarstan hosted the first stage of the World Series in synchronised swimming, which, according to FINA, was recognized as the best of 10 starts. The Minister also spoke about the plans to hold competitions under the auspices of FINA in the capital next year and to bring together the best athletes from around the world in Kazan.

The senior coach and director of the Russian national team in synchronised swimming (mixed duets) Gana Maksimova spoke about the readiness of athletes for the national championship, which starts tomorrow. She noted that the last start was over a year ago. “It is psychologically difficult when there are no real starts for the whole year. The psychological burden is important during the year, but it was not there. We were training ‘aimlessly’, we did not understand what our benchmarks were. Under such conditions it is difficult to build up training,” admitted Gana Maksimova. “At the same time we were able to come here with a fuller duo.”

The coach said that a new promising athlete, Olesya Platonova, will be performing at the championship in a mix duet. “At this start we will go on an experiment and repeat the technical programme twice,” said Gana Maksimova. Thus, two-time world and European champion Maya Gurbanberdieva will perform with four-time European and Russian champion in the mixed duo Aleksandr Maltsev outside the competition programme. “We decided to take Olesya for a run at this home start in the main competition,” added the coach.

Aleksander Maltsev stressed that he came to the Russian Championship with great desire. “It is important for us not only to perform and hone our technical and artistic skills, but also to promote mix duets so that more boys come to our sport. In this respect, it’s great that guys come to Tatarstan and there are promising duets. We hope that ours will contribute to this,” said Aleksandr Maltsev.

Maya Gurbanberdieva said that after last year’s world championship, she had an operation, which meant that the athlete of the year did not train. “I’m glad that the first start will take place in Kazan,” she admitted. “We love this city, it is not only beautiful, but also hospitable.”

During the press conference, State Duma deputies Olga Pavlova and Dmitry Yurkov also took the initiative to build a modern indoor swimming pool in Arkhangelsk, the home of the head coach of the Russian synchronized swimming team, Tatiana Pokrovskaya.