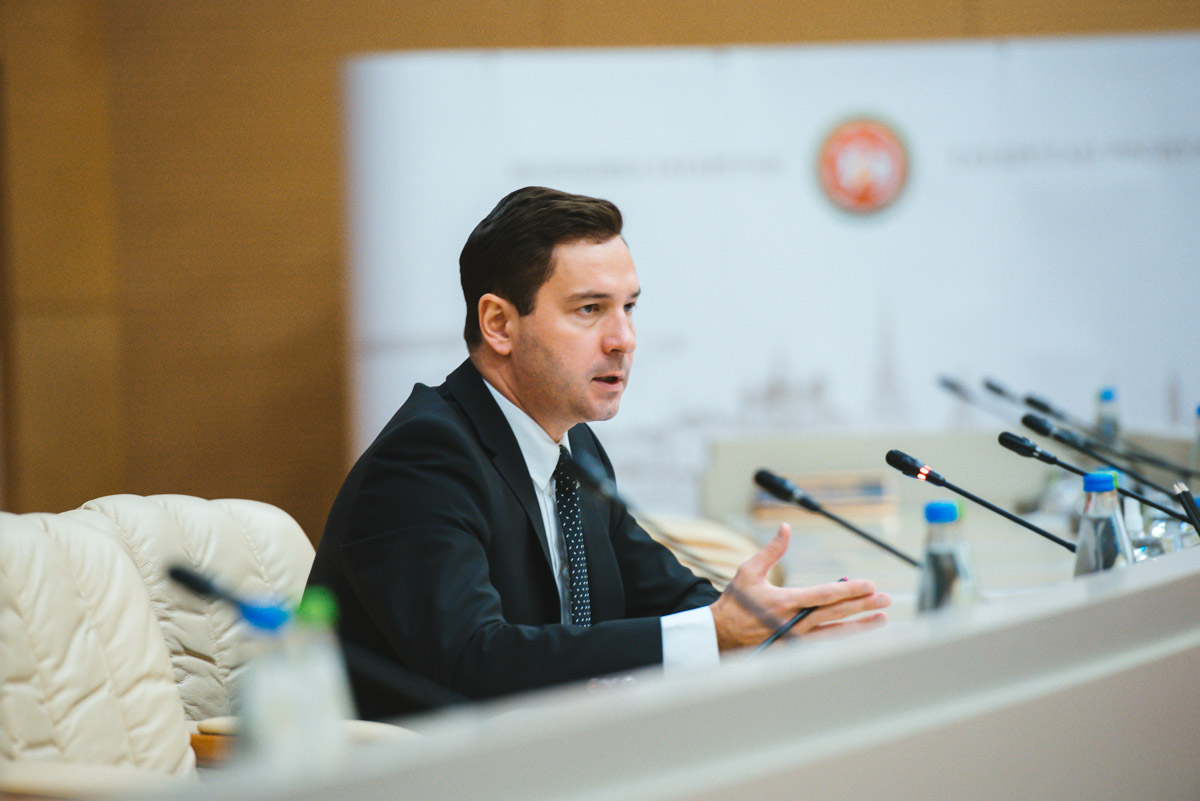 Today, at the briefing in the Cabinet of Ministers of the Republic of Tatarstan, the Tatarstan Minister of Sport Vladimir Leonov revealed the international sporting events to be held in Kazan in 2022.

According to Mr Leonov, the republic is expecting a year full of competitions of the highest level. On April 8-10, the Aquatics Palace will debut hosting the two events under the auspices of the International Swimming Federation (FINA) at the same time: a leg of the FINA Artistic Swimming World Series and of the FINA Diving World Series.

“Our republic has long been a reliable partner for FINA, and we annually host a lot of joint events. Since this year, FINA is seeking to introduce new event formats by combining the competitions. As for us, this opportunity to hold the two world series in parallel is a good chance to test ourselves in the run-up to the FINA World and European Aquatics Championships to be held in Kazan in 2024 and 2025. Preparations are going on routinely. In any case, FINA takes seriously the adherence to all sanitary and epidemiological requirements and keeps up to speed of the current situation,” the minister noted.

In late August, Kazan will be hosting the FINA World Junior Swimming Championships attended by 850 swimmers from 120 countries. “This tournament is strategically important for us in the midst of the joint project –FINA Development Centre. The centre has been operating for 3 years now. As the FINA representatives have repeatedly noted, Kazan is the home for FINA. We are grateful for the trust and do our best to make our events up to the high standards,” Vladimir Leonov pointed out.

The 16th FINA World Short Course Swimming Championships (December 17-23) with be the final and most important “aquatic” competition this year bringing together 1,200 swimmers from 180 countries, who will compete for 46 medal events. About 1,000 volunteers will be assisting in the competition organisation.

In May, Tatneft Arena will be hosting the World Judo Tour “Grand Slam” for the second time. Grand Slam competitions are ranked fourth prestigious after the Olympic Games, World Championships and Masters tournaments and the first among the competitions taking place more than once a year.

Kazan has been entrusted with hosting the tournament until 2024 and lined up with 10 other host cities, such as Paris, Tel Aviv, Tbilisi, Antalya, Dusseldorf, Ulaanbaatar, Budapest, Abu Dhabi, Baku, and Tokyo.

Another project that is a “resident” of Kazan on an ongoing basis is the All-Russian Urban Games, which were first held in 2020 in the URAM Extreme Park.

“Official announcement of the event is planned for March already. This year we will make a couple surprises for the participants. This is a festival-format event, but it reveals the “young” sports from the sports angle. We expect no less than 1,000 participants,” Vladimir Leonov disclosed.

“We will certainly introduce a number of exhibition sports into the programme, which, I am sure, will spark the interest in the participants and all visitors to our beautiful URAM Park,” the minister emphasised.

In 2022, Kazan will be hosting a new tournament that will continue the long-term cooperation of Tatarstan with the International University Sports Federation (FISU). FISU University World Cup Rugby Sevens will be held in Kazan under the auspices of FISU and World Rugby – International Rugby Federation.

The competition are scheduled for August 12-14 at the Tulpar Stadium. 8 male and 8 female teams (12 athletes and 4 representatives) are planned to take part.

One of the key international tournaments this year is the FIVB Men’s World Championship, which Russia will be hosting from August 26 through September 11. Matches will take place in 10 host cities with 24 national teams taking part in the tournament. Kazan Volleyball Centre will house 6 matches of the Championship second stage on September 2-4.

“We make use all of the experience we’ve gained in the field of international competitions in order to hold the matches and all related events at the highest level. Just in a few days, a volunteer campaign for the Championship will be launched. We encourage you to join the volunteers team of this tournament! The link for registration will be published on February 21,” the Minister of Sport of the Republic of Tatarstan said.

In early 2023, Kazan will play host to the Special Olympics World Winter Games 2022. “As you know, these competitions were postponed to January 21-27, 2023 due to the spread of the delta variant of coronavirus infection in the world. And now, I dare say it was the right decision,” Vladimir Leonov stressed out.

According to the Minister, Kazan is entirely ready to host the Games in terms of infrastructure and technology. At the federal level, preparations are coordinated by the Russian Ministry of Sport. Special Olympics movement representatives have a high regard for the work on the arrangements at the federal and regional levels in the lead-up to the competitions.

“It is an honour to host such a significant, in every sense, event for the first time in Russia,” the Minister exclaimed.