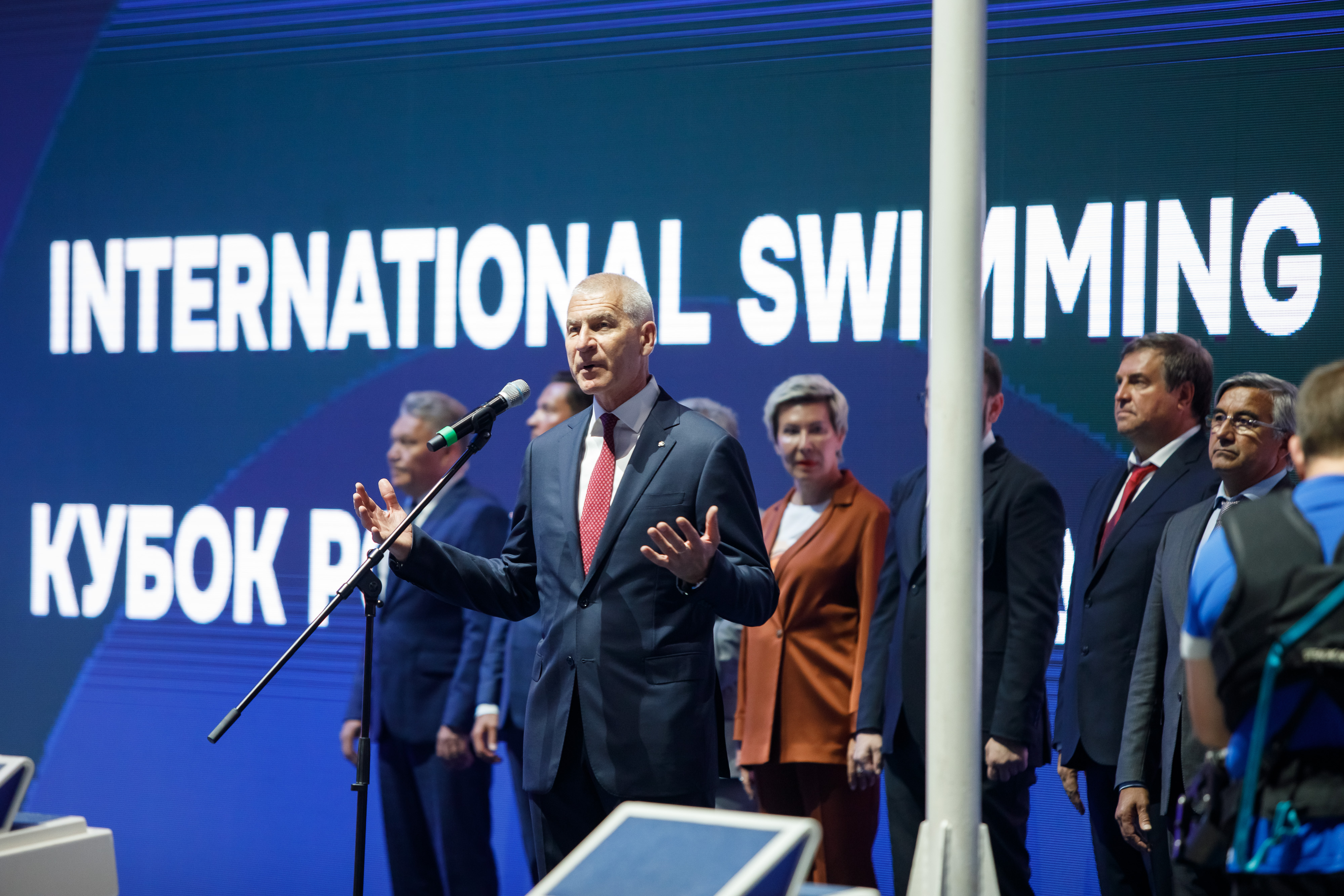 Aquatics Palace of Kazan has hosted the Opening Ceremony of the “Solidarity Games” international multidisciplinary competitions in swimming, artistic swimming, and diving featuring over 1,300 athletes from 16 countries.

Multimedia prologue of the ceremony, which revealed the main secret of the aquatics athletes and their winning formula, was followed by the “Sounds of water” composition. The latter was created with the use of generative graphics – each sound was visually boosted on the screens around the pools reminding of the way the water surface is reacting to the touch of an athlete.

Participating countries’ presentation had an unusual form that had no athletes’ parade bearing the flags but the live screen narrating the key information about the teams. Performances of the “Molva” (“Murmur”) folk band and “Action man crew” who presented well-known dances in an unconventional contemporary adaptation together turned out very creative.

Russian Minister of Sport Oleg Matytsin was first to deliver the welcoming speech.

“Solidarity Games demonstrate that Russia is a reliable partner, we stand in solidarity with all the countries that are ready for the effective cooperation. Sport is one of the most powerful uniting factors, while the principles of sport – friendship, mutual support, and fair play – should be basic for everyone. I’m thankful to the head of the Republic of Tatarstan Rustam Minnikhanov, leadership of Kazan, all organisers, presidents of the Russian Swimming, Diving, and Artistic Swimming Federations for the festival we are giving to the fans and guests being one united team. Participation of the Russian top athletes in the Games is a huge motivation for both junior athletes and spectators. International guests – athletes from 16 countries, ambassadors, international media – have a great chance to feel the atmosphere of friendship and hospitality of Tatarstan and entire Russia,” Oleg Matytsin announced.

Mayor of Kazan Ilsur Metshin mentioned that Kazan is extremely happy to play host to the “Solidarity Games” competitions.

“Kazan is genuinely happy to welcome all guests and participants of the “Solidarity Games” first stage. We’ve been missing large-scale events and are grateful to the leadership of the country for the trust in Kazan, of the Republic of Tatarstan, all those thanks to whom Kazan is hosting another international sporting celebration. We do love sport and lead a healthy lifestyle, set an example to our children. I want this sporting event to give Kazan new friends through you. Welcome to Kazan! Let the strongest win!” Ilsur Metshin noted.

Head of the Russian Swimming Federation Vladimir Salnikov expressed gratitude to the “Solidarity Games” organisers and declared the competitions open.

“For us Kazan has become the home city. The largest international and Russian competitions have been held in this amazing Aquatics Palace for many years, which is always sold out that makes us absolutely happy. I’d like to address the spectators to stand up for the athletes. Your support is invaluable. I’m confident that the tournament will be held to high standards as always. So, the “Solidarity Games” international competitions and Russian Swimming Cup are declared open,” Vladimir Salnikov.

A total of 376 sets of medals (92 in swimming, 32 – diving, 160 – artistic swimming) will be awarded at the first stage of the “Solidarity Games” international multidisciplinary competitions in Kazan.

Press service of ANO “Directorate of Sports and Social Projects”