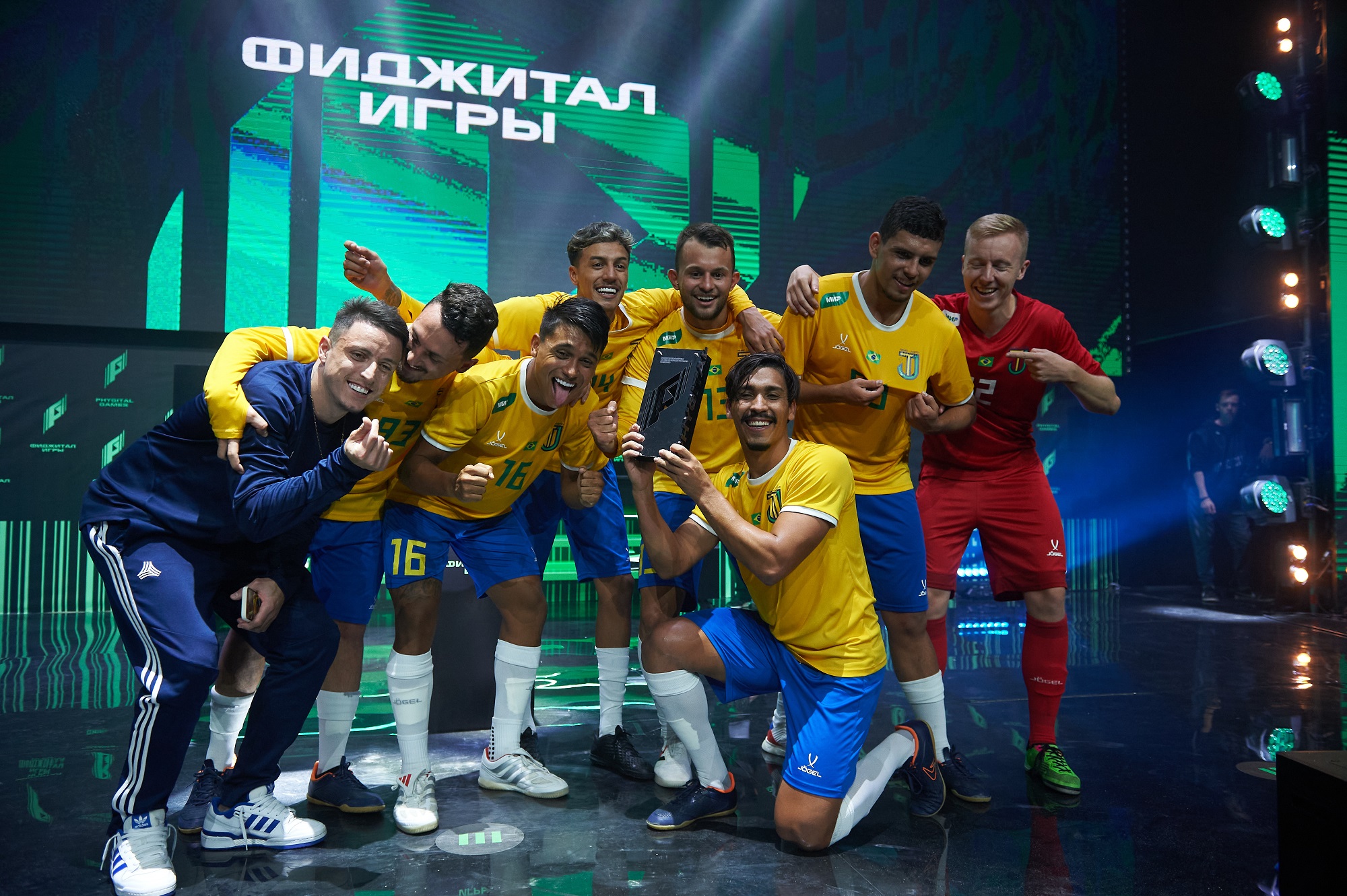 Tamo Junto team from Brazil outplayed New Russian from Ekaterinburg and came out on top of the Phygital Games.

The phygital football contains two parts: first, the players compete in a football simulator, and then, with the points scored in a virtual game, they go into to a real futsal field to find out who is the strongest there.

If the New Russian team is composed of the futsal players experienced in playing in the Russian top division, then Tamo Junto are Brazilian bloggers united from South American media football with Aleksey Gurkin, known for playing for Amkal. It was evident the guys from the Urals would make a focus on the physical part of the final, while their rivals would try to bet on the cyber football.

Brazilian team skillfully led the first part of the match from the tactical perspective. It kept the ball long, made plays, did not give opponents a chance to counterattack, so the plan worked out. In the first half, Cunha scored the first goal, and at the beginning of the second three-minute period, Tamo Junto put it in the back of New Russian’s net. The Ural team shot out all the goalposts of the Brazilians, but failed to win back.

As for futsal, the New Russian players instantly grabbed the lead and nearly did not leave the ball. They were circling at the Brazilians’ gates, fashioning opportunities one by one, and if it wasn’t for the goalkeeper Aleksey Gurkin, the score would quickly soar. In the third minute, Fedor Pankov opened up to an excellent pass from his partner after a counterattack and did not miss, while in the ninth minute, Ignat Sabirzyanov kicked a good ball into the corner of the goalkeeper’s left – 2:0. Brazilians tried to liven up their game with substitutions. Cunha and Dagoberto created some good chances, but New Russian kept sticking to their story and hardly made mistakes.

Gurkin kept on saving Tamo Junto after the break, pulling out two dangerous balls, and his teammates significantly added more offense. Matheus was aiming at already an empty net, but Ilya Korelin stopped the ball half a meter from the goal line in a split. Dagoberto fired accurately from his left foot, though a bit out of the net. The New Russian team took a risk by substituting the goalie to the sixth outfield player a minute before the close of the game, and almost paid for it. Zanizzelo lacked just a bit to bring the Brazilians victory. A penalty shootout anyway!

New Russian’s captain Ivan Komarov repelled the Brazilians’ first ball right away, but Cunha, who substituted Gurkin at Tamo Junto, immediately made a save. Gurkin came close to the six-meter mark and left no chance for the goalkeeper – 1:0, Pankov countered with his cannon – 1:1. Matheus hit a top corner – 2:1, Sabirzyanov leveled the score – 2:2. The fourth shot from the Brazilians was made by Jhonatas – 3:2. And Cunha parried Korelin’s ball. The decisive kick was performed by Zanizzelo! Tamo Junto is the winner of the first phygital football tournament!

“It was hard to win back two days nonstop. We didn’t have enough power, that’s why the result is like this. I would not say these are the strongest Brazilians. Just a little higher than amateurs. We lacked the experience of playing e-football. We practiced a bit before the departure and we went to a computer club in Kazan. This is our weak side. Zero goals in two matches – really hard after this,” New Russian player Fedor Pankov said.

“I had a flight from Brazil to Russia to such a perfectly organized tournament. I’m truly happy! Today we had the tactic to bank on FIFA. All in all, we are good at futsal, but it’s the first time we played together. So we knew it would be tough. We looked very good and we are champions! I couldn’t even imagine the tournament would be organized so excellently,” decisive goal scorer Zanizzelo shared his impressions of the win.

From the very first seconds of the digital match, Lokomotiv team players captured Fake Football’s goal, composed of the players from the 2Drots media league club. Artem Khalilov and Anton Klenov left no chance for Bogdan Timoshenko and Karen Harutyunyan, and the first half ended with a 2:0 score in favor of Loko. But as it turned out, the worst was yet to come for Fake Football. In the second half they lost six goals and only with the 0:7 score Andrey Belka Belov succeeded to score a consolation goal. Robert Fakhretdinov scored quadruple. The 8:1 result left Fake Football few chances for collective success.

In the semi-finals, Lokomotiv did not protect a four-goal lead, giving way to New Russian into the golden match, but bronze game set things right. Vadim Tsai quickly scored and assisted on goal into an empty net, and then the game turned into a show. Spectators witnessed several attempts to score a scissor-kick, nice tricks and even a goalkeeper’s goal. Andrey Belov did a good job, but that was not enough to win.

“We expected digital part of the match to go this way. Yesterday we were also supposed to lead with the same score, but scored only four goals, conceded four times on the field, and then lost on penalties. If we had met an easier opponent in the semi-finals, three or four goals in FIFA would have been enough for us. So today we would play with New Russian in the final. We would not give away “minus 7” anyway. It was clear from the very start the show would happen. If there is a four-five-score difference, then there is no sense in contesting the victory. We played for fun, did fine combinations. The match came off! Tournament itself is amazing. The future lies with phygital sports,” Lokomotiv captain Robert Fakhretdinov said.